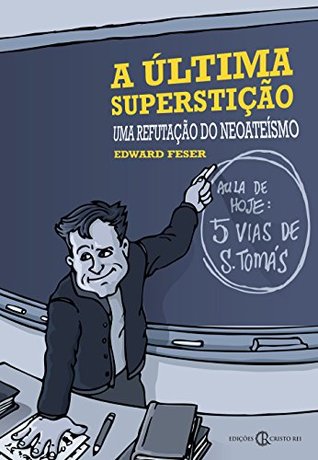 
Aug 04, Fr. Ryan Humphries rated it it was amazing. An astounding and philosophically dense work that is really readable by anyone. Feser cuts to the heart of the collapse of western morality and culture.


This is no easy read but it's totally worth it. Jul 31, Melissa Stebbins rated it really liked it.

Billed as a refutation of the New Atheists, this book is much more. A back to basics explanation of the philosophy of Aristotle and Aquinas, he explains the metaphysics at a level that is perfect for people with no training in philosophy beginning with the questions these philosophers were attempting to provide an answer to.

A lot to think about in this book and I'll definitely be extending my reading into A-T philosophy in the future. One word a caution. This book is highly polemic and while I found that mildly entertaining, it is probably not the best tactic for winning people to your position. Yes the Dawkins, Dennett, Harris, Hitchens collective are shallow and ridiculous at times but sometimes a good argument can be lost in the insult trading.

Jul 09, Julia rated it it was amazing. Edward Feser is like the college professor you always dreamed of having--irreverent to the cool kids who like to hear themselves talk and exciting reverence to the Chestertonian magic of reality. Feser coaches you through the more technical aspects of scholastic philosophy, and his humor throughout makes it worthwhile. He presents Plato, Aristotle, and Aquinas in a way that puts my Christian-affiliated college philosophy course to shame.

Come revisit and maybe like me discover for the first time the substantive thought that makes up ancient and medieval scholarship. Here is a sample where he addresses the problem of evil: "The only way the atheist can make it plausible to say that nothing could outweigh Aushwitz, etc. But if he's supposing that there is no God, then in presenting his argument from evil he's simply arguing in a circle , assuming the very thing he's trying to prove, and thus not proving it at all.

In effect he's saying: 'There is no God, because look at all this suffering that couldn't possibly be outweighed by any good. How do I know there's no good that could outweigh it? Oh, because there is no God. For if some creationist says he 'can't imagine' how an eyeball could have evolved or whatever , Dawkins and Co. Yet when the shoe is on the other foot, we're supposed to take the limits of Dawkin's imagination, or Hitchens's, as an infallible guide to what an infinite First Cause or Supreme "Intelligence is capable of doing vis-a-vis bringing good out of evil.

If anything, the limits of our imagination are far, far less relevant to understanding what a First Cause who is Being Itself and the Supreme Intelligence might bring about by way of good for a creature with an immortal soul than they are relevant to understanding the potentials inherent in a finite impersonal process like natural selection operating on finite living things. Reason itself, as I have argued, shows us that there is a First Cause who is Being Itself, Goodness Itself, all-powerful, all-knowing, and all the rest, and it also shows us that we have immortal souls.

Hence reason tells us that there is a God who created us for a destiny beyond this life and who is fully capable of guaranteeing that the good we attain in the next life outweighs the evil we suffer in this one to such an extent that the latter, however awful from our present point of view, will come to seem "not worth comparing" to the former, and indeed if anything will even by seen to have been worth having gone through from the point of view of eternity. And therefore, reason itself tells us that there is simply no reason to believe that even the worst possible sufferings of this life constitute any evidence whatsoever against the existence of God.

Nevertheless, since we are finite beings, it can be very hard to keep this in mind when faced with severe suffering.

The Last Superstition: A Refutation of the New Atheism

The arguments of philosophers and theologians, however logically impeccable, seem cruelly abstract and cold when compared to the agony of parents of a raped and murdered child. But then, reason is abstract and cold. Atheists are always telling us how we need soberly to follow where it leads us, even if it were to break our hearts by telling us that there is no hope for cosmic justice, no hope for seeing lost loved ones ever again, no hope for a life beyond this one. Then, when a Thomas Aquinas reassures us that in fact no matter how bad things get in this life, reason assures us that God can set it right, they feign outrage at such cold-hearted logicality.

Some people just can't take yes for an answer.

Not because faith is emotional. Faith is not emotional; it is rather an act of the will. And again, not because faith contradicts reason, for it doesn't. Rather, faith in God in the face of evil is nothing less than the will to follow reason's lead when emotion might incline us to doubt. The intensity of the pain one feels can make him want to shake his fist at God, like Job.

Yet reason says that the pain is part of an overall plan which we cannot yet fathom, but one in which God can bring out of that pain a good compared to which it will pale in significance. Hence reason tells us: have faith in God. We will not always be able to understand what that plan is, or how this or that particular instance of suffering fits into it. We have some general clues here and there--for instance, the fact that certain goods, like patience, forgiveness, and self-sacrifice, cannot be had without certain evils.

But we don't know the details. And yet, why should we expect to know them?

http://emscherperle.de/error/allen/kuky-singletreff-berlin.php If there is a God of the sort the arguments I've described point to, and if the soul's ultimate destiny surpasses the cares of this life in the way that immortality implies, then these matters are so far beyond our ordinary experience that it would be extremely surprising if we could fully understand them.

Again, the atheist will of course dismiss all of this as falsehood added to falsehood. The point, though, is that he cannot do so and at the same time have his 'argument from evil' against the existence of God, for if that argument assumes that all these claims are false, then it simply begs the question against the theist, and thus fails to prove anything.

Years of hearing people who do not have a good grasp of first causes rant about there being no proof for causality or God, wether economists or plumbers, will do that to any of us. Take this polemic's popularity as a cultural expression of frustration. Also, note the excellent news he provides from his field, few true philosophy professors adopt a full sense of despair about the ability of man to know anything, he says.

This is good. Amused by his historical perspectives about politics in last half century, but also took them with a huge grain of salt. Like listening to my cranky friends!

I will go and read about McCarthyism more in depth before I take his word on it. I jotted down names from Feser's old life wherein he cites atheists who openly struggled with doubts, who valued the clarity of the aristotelian system and who admired the accomplished minds of their religious friends. The almost year-old philosopher who finally became convicted of a first cause, Anthony Flew, was specially awe-inspiring for his courage.